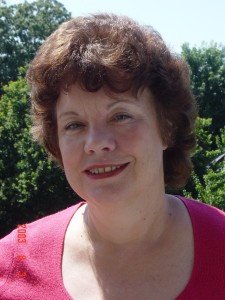 In my post a few weeks ago on the conventions in mystery, I mentioned a fascinating book that breaks many of them, When the Clocks Stopped by M.L. Eaton. This mystical mystery takes place in the village of Rype-on Marsh in the south of England. Lawyer Hazel Dawkins is anticipating some peaceful time off before the birth of her first child. When she agrees to a little part-time work, she finds herself drawn into troubling events in the lives of her clients—and in the past. The distant past. Mysteriously, she encounters Annie, a woman who lived more than two centuries ago when Rype-on Marsh was a violent place, dominated by gangs of smugglers. With multiple layers of both time and crime, it’s an amazing and original tale. I’m happy to have Marion Eaton as my guest today. In late April we’ll be doing a ten-day sale and a three-book give-away together with a third mystical mystery author, the innovative Australian writer Virginia King. We’ve enjoyed each other’s work and are excited to introduce our readers to books we think they’ll also enjoy.

Retired from legal practice and semi-retired from holistic therapy—although she still teaches Reiki and other workshops—Marion lives close to the sea in the beautiful East Sussex countryside with a long-suffering husband, a lazy saluki and an urge to write into the small hours.

MLE: Thanks so much for your interest in my book and particularly for thinking up all these wonderful questions. I‘m really looking forward to answering them, so I’m going to dive straight in ….

AF: Your book is historical at two levels, being set in 1976 and slipping in time to 1747. To what extent is it based on real historical events?

MLE: I had to smile when I read this … because I remember many events of 1976 perfectly and it doesn’t seem like a historical period. But, of course it is!

I think perhaps it is best for me to come clean from the start. The book was originally going to be a memoir of the first year when I set up in practice on my own account as a country solicitor (attorney). I’m sure you can guess the date? 1976. I had written a few chapters— very badly and in very stilted language, because after all, I was a lawyer— when I suddenly found myself writing something far more exciting and definitely inaccurate. Not a memoir at all. I stopped and thought about it for a minute or two and then decided that I might as well enjoy myself. Who would be interested in the memoir of a country solicitor, anyway? But hidden away in my memory were a lot of interesting stories that I had encountered around that time. It seemed second nature to stitch them into the story. So the short answer is yes, the story is based on real historical events of 1976. Later, when Annie came into the story, she arrived complete with her own personality and history. It was then that I had to do considerable research to check that the background and events surrounding her in 1747 were as accurate as possible.

AF: I like the fact that the mysterious phenomena in your book happen to people who have no expectation of them, no belief that such things are possible or that time is anything but a linear march. Have you ever had even a hint of this kind of mystical experience? If not, what’s the origin of this aspect of the story?

MLE: When I was a child, my mother used to tell me stories of when she was a little girl. Many of them had to do with her experience of ghosts and other psychic phenomena. I always longed to have similar experiences but I was a sensible, pragmatic child and despite all my efforts nothing similar ever seemed to happen to me. Until, one day I was looking over a house … and the rest is in the story!

AF: Did you set out to write a murder-less mystery? There’s crime and deception in your book, but this isn’t the standard whodunit. How conscious were you of breaking some of the conventions of the mystery genre, while keeping others?

MLE: To be honest, I didn’t actually give much thought to genre when I was writing the book. As I’ve mentioned, I was writing for the sheer joy of writing and the mystery evolved naturally. I suppose that as a lawyer it was my bread-and-butter work to solve problems and difficulties so that was a good starting point. The book had to be interesting for me, as well as for my readers. But in the end I had little choice: my characters fleshed themselves out and made their own decisions about the story!

AF: Tell me about your research concerning the eighteenth century smugglers. Did you do it in the Romney Marsh area? How did you go about reconstructing the speech of the time and place? Is Annie’s role in the Owlers unusual?

MLE: I still live near Romney Marsh. This part of Britain (Kent and East Sussex) is wreathed in history and we are fortunate in having great local museums and local history societies, all of which were very helpful both in giving information and pointing me in the direction of contemporary accounts and records of smugglers.

I have always been fascinated by local and family history and my forebears have lived in this part of the world for generations, so I was brought up on tales from the past. Being close to the continent of Europe, for hundreds of years smuggling was a way of life for many people in this area. (Indeed, only yesterday, there was an item on the news about the foiling of a smuggling gang at Dover, very close to the Marsh).

I have no doubt that, then as now, it was a raw and violent occupation and there were many criminal gangs involved, but over the centuries it has become as romanticized as Robin Hood. Smugglers called themselves ‘Gentlemen Free Traders’ and at one time in the eighteenth century practically the whole local community was involved one way or the other. It was the ‘Preventatives’—Government enforcement officers—who were seen as ‘the baddies’.

It was Annie herself who spoke to me of her role in the Owlers, but from the accounts and tales of the rival gangs of smugglers it is clear that women were often involved. Although most acted as signalers, lookouts and scouts, there were others who worked alongside their men in landing smuggled goods from the boats.

On a personal note, I remember my own grandfather telling me how his father would sometimes warn him that he might hear unusual sounds in the night and if he did, to stay in his bed and put his head under the pillow. And always, the next morning there would be strange horses in the stable in place of their own horses. But beneath a stack of hay would be found a small barrel of brandy or a bolt of silk cloth. The horses would be returned a day or two later, when the other horses would also be returned to their owners.

I was lucky to have contemporary records to help me with reconstructing the speech of the time, and also to recall the local Kentish accent that surrounded me in my childhood. It’s rather sad that such accents are now fast disappearing from common use, but some of the older people in the area still speak in the same way.

AF: The village life and scenery is beautifully portrayed, with vivid details of the buildings and gardens. I’ve never been to a small English village but your book made me feels as if I had. The architecture in Rype-on-Marsh is integral to the plot. How did you work this in? I’m curious to know if there are places that served as models, or this was a blend of reality and invention.

MLE: I’m thrilled that you were able to identify with the area and town in When the Clocks Stopped. To me, as to many others who live there, Romney Marsh has its own very distinct identity—almost its own character—and there’s no doubt at all in my mind that the town on which I based Rype-in-the-Marsh also has its own personality. Both the Marsh and the town feel to me to be a huge part of the story, as well as the history that surrounds them. I did embroider details onto the fabric of the town, the most significant being the King’s Ditch, but most of the description of the town and its building and streets are accurate enough to be recognizable to local people. There really are dikes crisscrossing the Marsh as well as secret passages centering on the church.

AF: Thank you so much for taking time for all these questions.

MLE: No, it is I who should thank you, Amber. It’s been lovely to talk to you and very kind of you to give time and space to this interview. I particularly appreciate it because I love your books and can’t wait to finish the Mae Martin series. On the other hand, I don’t want to as I’ve become very fond of her! You’ll just have to keep writing …

Her books are available in e-book and paperback:

This site uses Akismet to reduce spam. Learn how your comment data is processed.